Punarnava is known as Hogweed in English, and the botanical name of the plant is Boerhavia diffusa. It is an indigenous plant with numerous medicinal properties. Punarnava derives its name from its nature of growth and proliferation. The aerial part of the plant dries up in summer and regenerates in the rainy season; the word “Punarnava” means Punar = once again, Nava = new, on the whole meaning “becoming new again”.

Punarnava has been in use in Ayurveda since ancient times. All parts of the plant can be used in the preparation of various formulations due to its therapeutic benefits as follows. Punarnava plant powder has anti-bacterial properties that make it an excellent substance to reduce bacterial infections. The chloroform extract of the leaves of Punarnava can reduce blood glucose levels and shows a significant increase in plasma insulin levels. The aqueous form of root extract of Punarnava possesses good liver protective activity. Punarnava Powder consists of antiproliferative and antiestrogenic activity that can act on breast cancer cells to control them. The leaf and stem extracts of Punarnava could be applied to oedema as they can soothe the inflammation and swelling. The root extracts of Punarnava can stimulate the white blood cells and increase the tolerance to stress. The plant has an anti-fibrinolytic activity that helps to decrease the deposition of fibrin and platelets in vessels. The root of Punarnava consists of anti-helminthic properties to remove intestinal worms and asthma.

There are no reviews yet 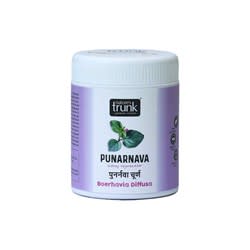